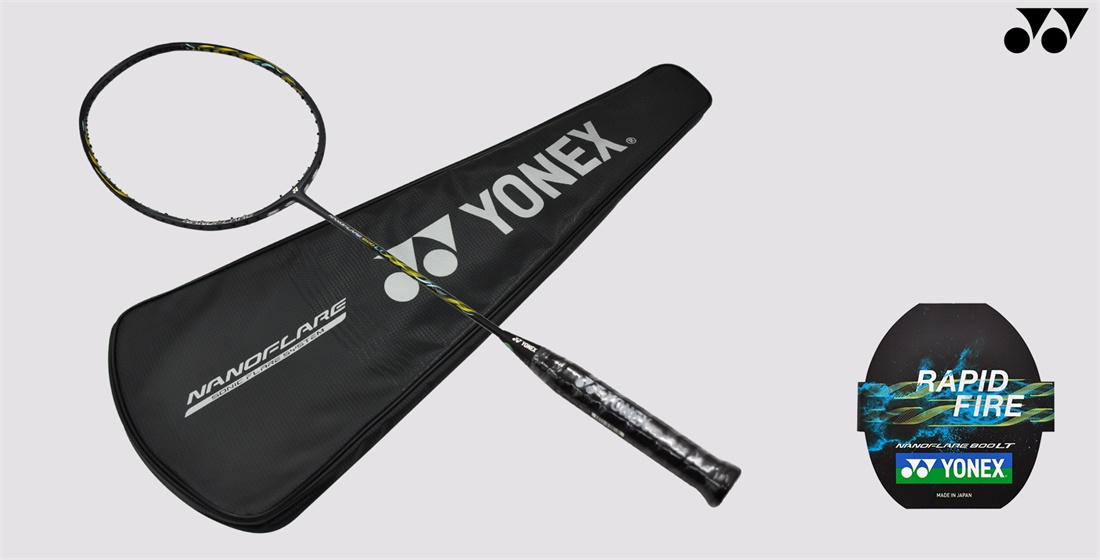 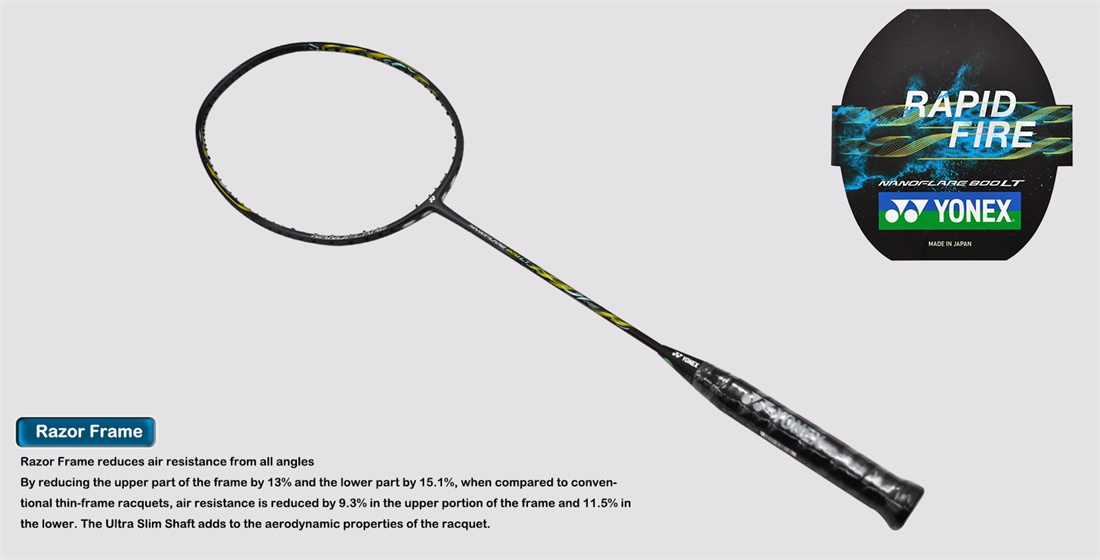 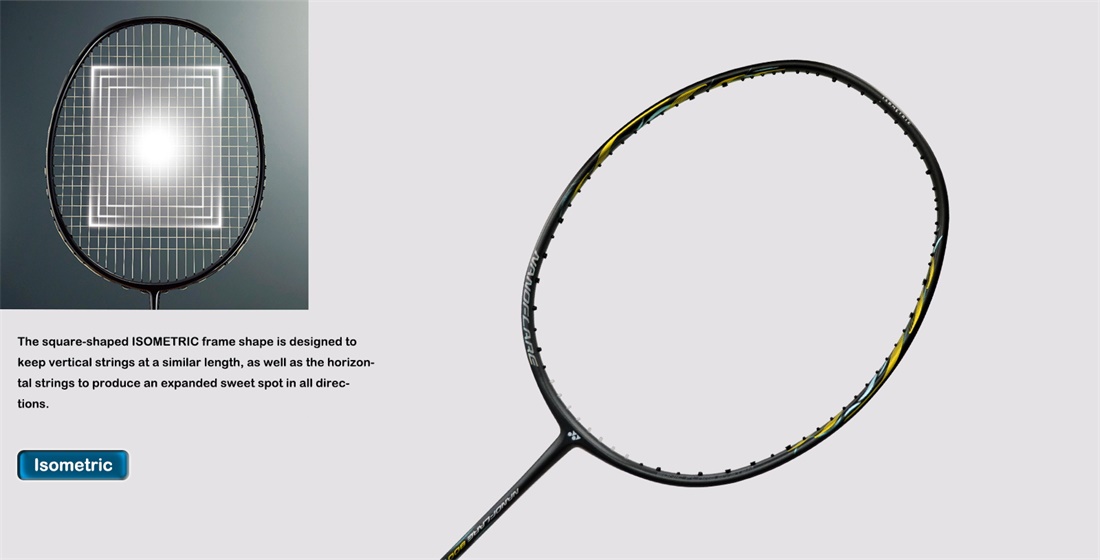 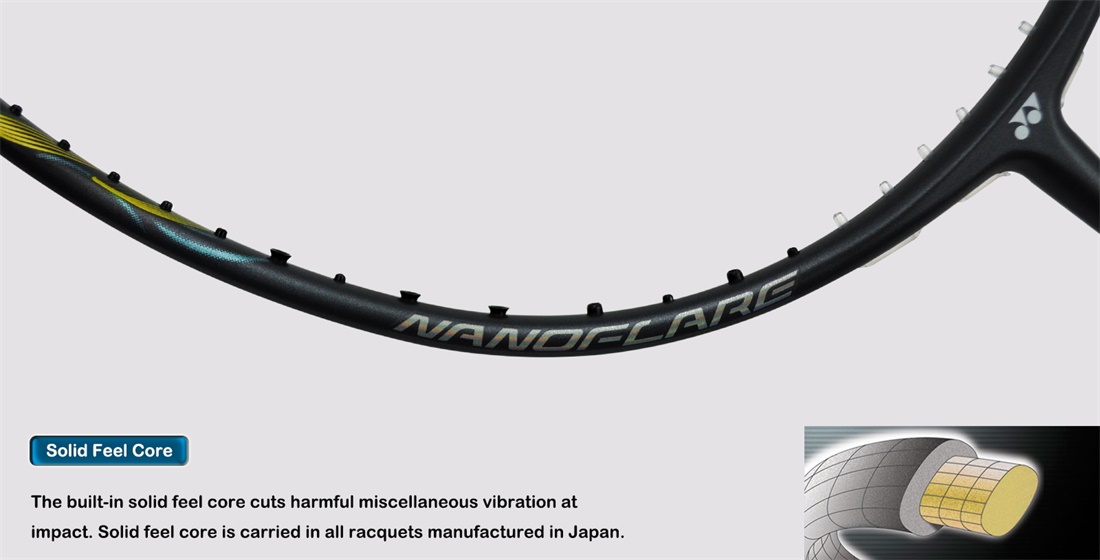 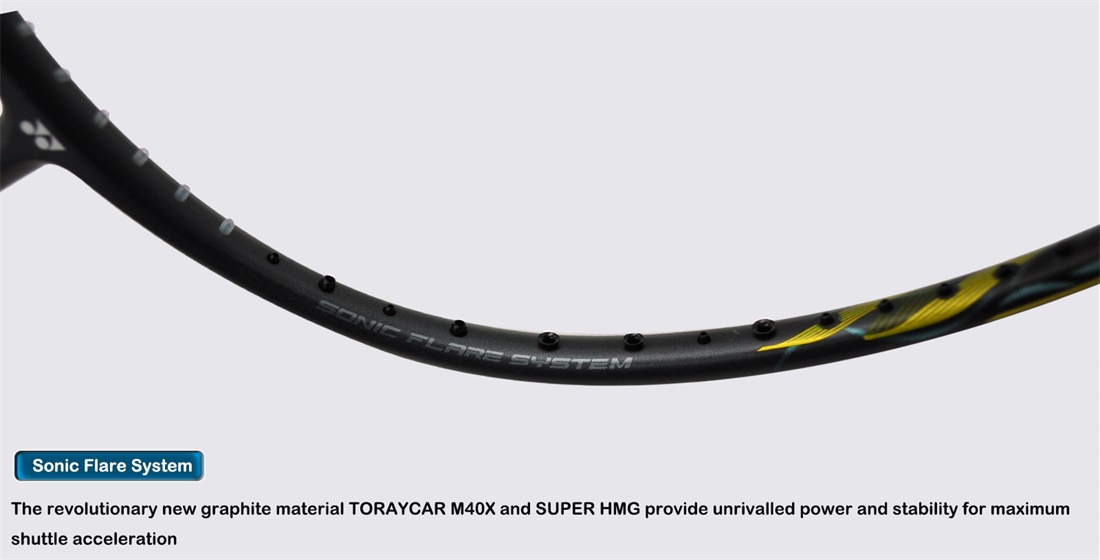 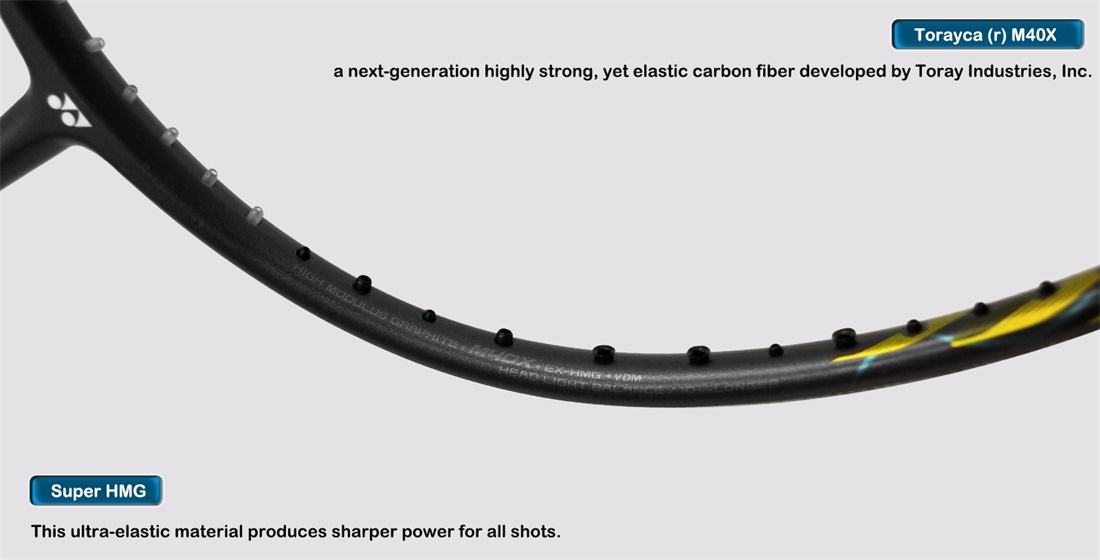 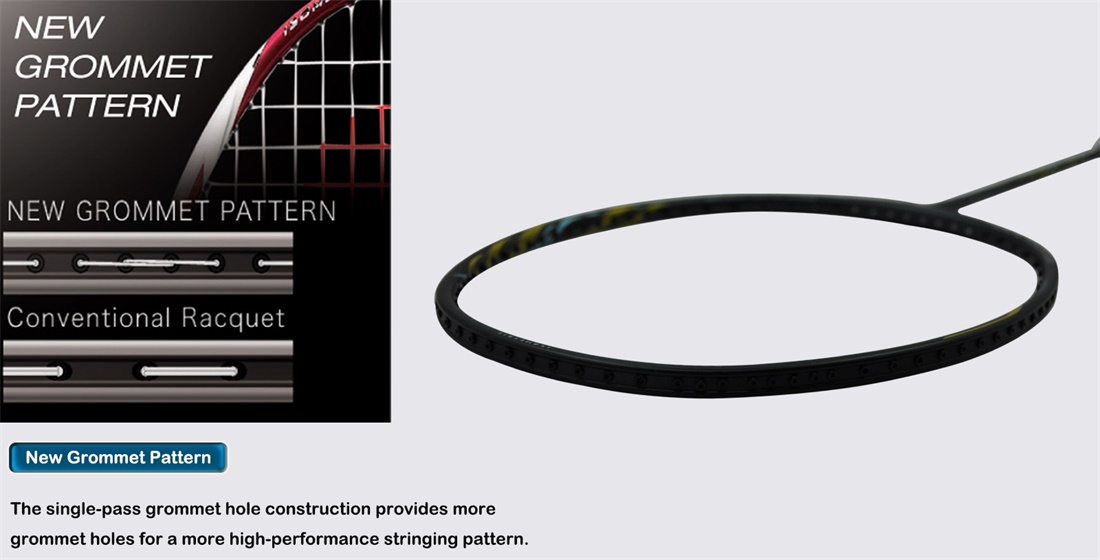 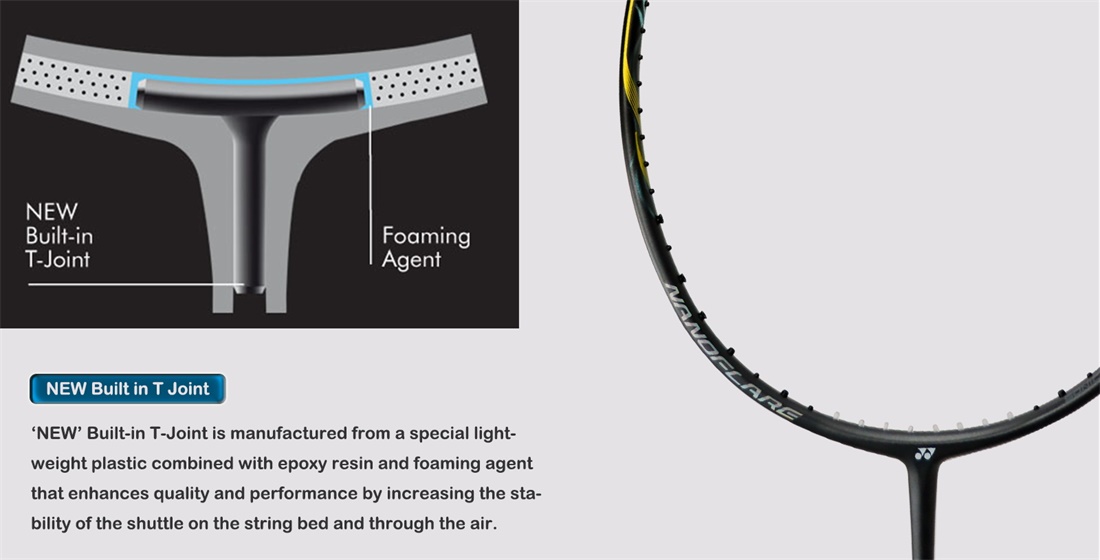 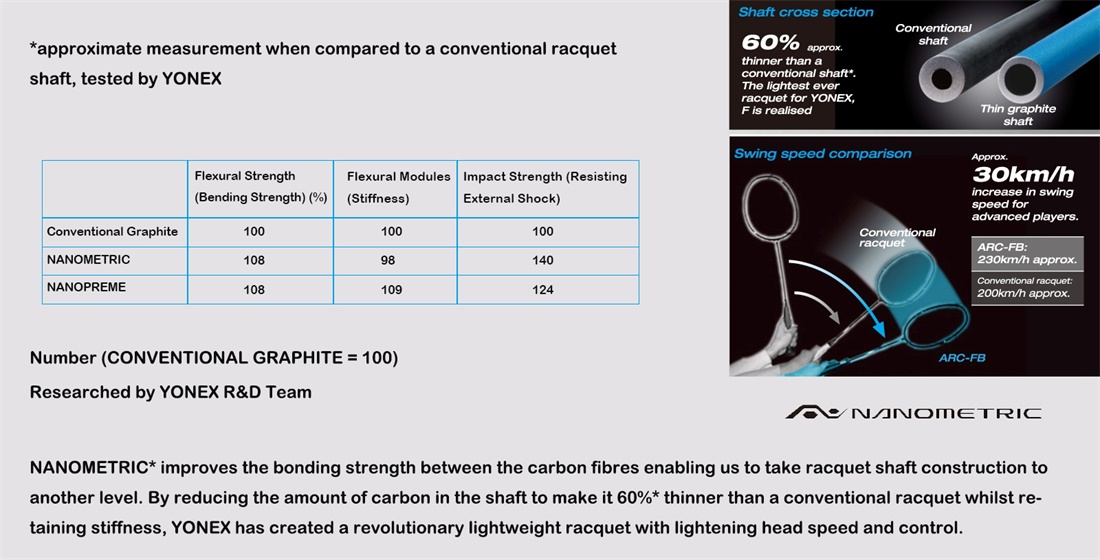 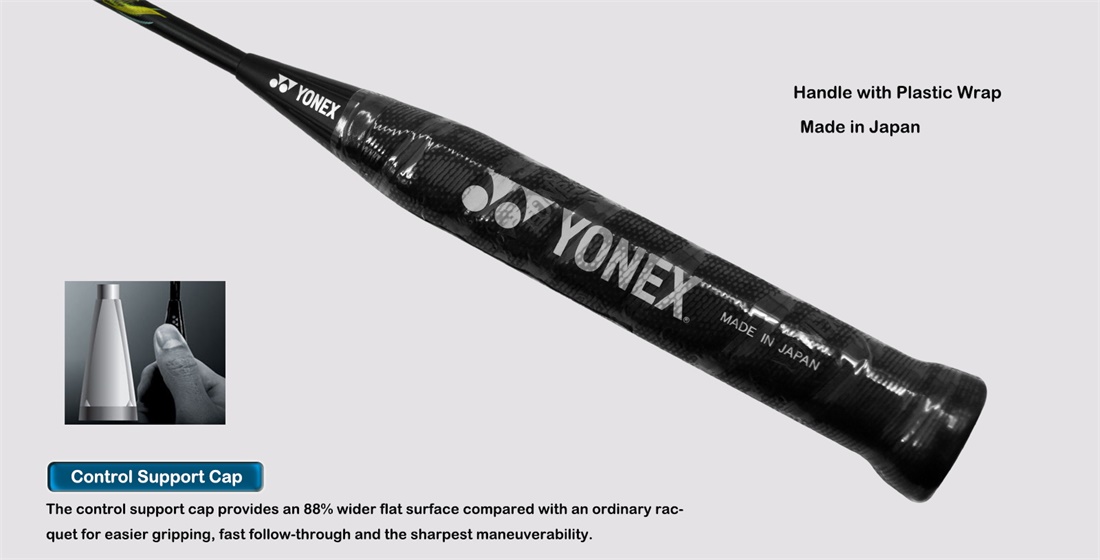 The main new feature of the NANOFLARE 800 is the ultra-thin Razor Frame, which is aerodynamic from all angles. Compared with other thin frames, the 360° streamlined Razor Frame means air resistance is reduced by up to 11.5% from all angles*1, resulting in a faster swing speed. This also means that shuttle speeds off the racquet have increased. Overall, because of the quicker speeds, the player can reach the shuttle earlier, improving their ability to pressure opponents with aggressive drives and pushes.
Additionally, a high elasticity carbon has been utilized in the top of the frame for repulsion, while a new graphite material, TORAYCA® M40 X*2 that is both strong and highly elastic is used in the lower part of the frame. This is the 800’s iteration of the Sonic Flare System, designed to rapidly eject the shuttle after contact.

Razor Frame reduces air resistance from all angles
By reducing the upper part of the frame by 13% and the lower part by 15.1%, when compared to conventional thin-frame racquets, air resistance is reduced by 9.3% in the upper portion of the frame and 11.5% in the lower. The Ultra Slim Shaft adds to the aerodynamic properties of the racquet.
NANOFLARE Series’ Innovation: Sonic Flare System
The top of the frame is constructed with the high-elasticity graphite material EX-HMG, with a 7.3% improvement in repulsion performance over conventional graphite, while new graphite material TORAYCA® M40 X, which is both incredibly strong and elastic, is spread over a wide portion of the bottom of the bottom of the frame, enhancing stability and elasticity.
Yonex Original Isometric Technology
Yonex’s original Isometric square frame shape results in a wider sweet spot than a standard circular frame by equalizing the length of vertical and horizontal strings. This technology, created originally by Yonex, was first deployed in the Isomteric 500 badminton racquet, launched in 1992, after winning numerous top titles in tennis. Since then, Isometric has become a popular world standard.

There are no reviews yet.